Should I Invest in Cryptocurrency?

Before jumping into the topic and answer the question "Why you should consider investing in cryptocurrency?", I have to start off with the basic principles.

This will help us be aligned and maybe on the same wavelength.

A few years back, when we heard the word currency, we would straight away associate it with the paper money in our pocket or the money we have in our bank account. The traditional money is called FIAT currency.

FIAT currency is a term derived from Latin which means determination by authority. As the name suggests fiat currency value is mandated by an authority, in most cases - the government.

This form of currency is issued and printed at will by the central governments through the central banks and is not by any way linked to any other asset (like gold).

As it is up to the discretion of the government to print more FIAT currency, governments themselves controls the supply and demand.

Why is FIAT the most used currency worldwide?

FIAT is widely accepted all over the world to buy almost any good or service. It comes in many forms such as paper money, coins, credit, loans or bonds.

If you apply for a credit card or personal loan and these are approved by your bank, that credit or amount of money you receive is a form of fiat money because you’re essentially using money on the basis of your creditworthiness and agreement that you’ll pay back the funds — typically with interest.

Fiat money can also be useful for exchanging currency when you’re going on holidays or sending money in other parts of the world.

International money transfer services allow people all over the world to take one form of fiat money and send it in the form of a different type of fiat currency for a small fee.

Nowadays there is a larger spectrum of currencies. The diversity of currencies has been increased by the introduction of cryptocurrencies back in 2009.

Why have some currencies, such as the U.S. dollar has thrived, whilst other currencies struggled and failed?

This is based on the basic economics principle of supply and demand.

It is of utmost importance that the central authority controlling  the supply and demand keeps the right balance. If one outweighs the other, the results could be catastrophic, and hyperinflation may occur.

A simple definition of hyperinflation:

In economics, hyperinflation is very high and typically accelerating inflation. It quickly erodes the real value of the local currency, as the prices of all goods increase.

This causes people to minimize their holdings in that currency as they usually switch to more stable foreign currencies. In recent history often the U.S. dollar price typically remained stable when compared to other relatively stable currencies.

Hyperinflation is not an occurrence that happens on a daily basis but it did occur several times throughout history.

Just for sake of example, in 2007 the government of Zimbabwe started printing more and more money to pay for the war in the Congo.

The inflation rate was 98% on a daily basis, this means that prices doubled every 24 hours. The value of the Zimbabwean dollar depreciated so much that the 100  Trillion-Dollar note was worth 40 U.S cents.

Hyperinflation has abominable consequences on society and the standard of living. As cash becomes worthless, people start hoarding durable goods such as motor vehicles, electronics and also perishable goods like bread and eggs if the inflation persists.

This will lead to the scarcity of daily supplies.

Hyperinflation sends the value of a currency plummeting compared to other foreign currencies. Importers will struggle or go out of business as the cost of importing skyrockets leading to an increase in unemployment.

The government tax revenues fall and it has trouble providing basic services. The government prints more money to pay its bills, worsening the hyperinflation.

The consequences are interlinked and one issue will create another. In the example explained before, hyperinflation in Zimbabwe led to the failure of the Zimbabwean dollar and eventually changing changing their primary currency to U.S. dollar.

Is fiat money the safest currency?

Fiat currency has the luxury of being the most accepted form of currency. It’s supported by multiple payment networks and currency exchanges around the world.

Fiat money can also help stabilize a country’s economy for two reasons. Governments control the money supply and it isn’t based off of a volatile commodity.

On the other hand and as we have already explained, hyperinflation can occur if governments do not control the supply and demand properly- leading to a severe drop in its value.

Apart from occasions of hyperinflation, fiat money is printed continually to keep up with demand and circulations.

Normal inflation usually occurs on a yearly basis and is approximately 2% in normal circumstances.

Inflation under any circumstance kills the purchasing power of fiat money.

How can I hedge against inflation?

Undoubtedly fiat money is the predominant currency in most countries around the world. This makes fiat money a necessity whereby anyone requires it to live a comfortable life.

The U.S. Dollar is the strongest fiat currency globally.

Since the U.S. dollar is the strongest currency, it attracts investors around the world  in times of crisis or recessions, leading to an increase in its price.

Although we are currently in an economic downfall due to the COVID 19 pandemic, one would expect an increase in the U.S. dollar price.

However, the exact opposite is happening.

If you have a look at the chart below, it shows that the USD is a dying asset and has been dropping in value for most of 2020.

Why is this happening to the USD?

The reason for the continuous drop in the price of the USD is simple. As explained earlier, when a government prints money constantly there is an increase in supply of fiat money on the market leading to a drop in the currency's value.

This is exactly what the Federal reserve is currently doing, printing more and more U.S. dollars out of thin air.

The below is the estimated amount of money supplied according to a Forbes article  covering year 2020:

The federal government spent $6.55 trillion in 2020, while tax receipts and other revenue trailed at $3.42 trillion. Much of the spending came from the $2.2 trillion economic relief package that Congress passed in March…

We are pretty sure that the federal reserve is not even close to stopping the supply of the U.S. dollar, which will have a further adverse impact on the USD value.

Although we all need fiat currency, anyone who keeps most of his savings in fiat will lose a big part of it's value over time. The purchasing power of 1 USD will be much less in a few months.

Where should I invest my money?

The most fundamental rule of investment; Don't put all your eggs in one basket. This, also applies to fiat money.

You can argue that there are several investments which you can put your money in. Like corporate stocks and government bonds.

All these assets carry a significant amount of risk mostly due to the fact that central banks can manipulate their price direction by changing the monetary policy so they are still interlinked to fiat money.

For example. Corporate stocks have seen record high prices in recent time, which makes them attractive to the common investor.

However, the reality is that stocks are in a hyper bubble which has been created exactly for the same reason the we discussed before - Central banks pumping money and buying all type of assets.

Investors which have put a big % of their wealth in corporate stocks are running into major risks as this bubble will burst at a point in time bringing corporate stocks prices to their fair value.

Government bonds are more secure, but the interest paid is ridiculous., even in the long term and especially when not diversified with other asset classes, such as stocks. No point to discuss this further.

Is there a better alternative investment?

The better alternative for long term investment is Bitcoin and other cryptocurrencies. There has been a lot of debate that cryptocurrencies are risky, that they are unregulated and by investing in cryptocurrency you might lose all your money.

Although there exists no safe haven in investing and a risk is always present. What most people don't realise is that holding onto fiat money involves a level of risk as well.

In the current conditions we dare to speculate that the risk is higher by holding fiat money then holding onto cryptocurrencies.

We have seen that whilst the USD value is dropping, certain cryptocurrency prices are surging.

Cryptocurrency prices are inversely correlated to the price of the US dollar as more and more people are realising the risk of fiat money.

This negative correlation will continue to increase the more money is pumped by governments from thin air.

A wise investment decision for anyone looking to invest in the current climate would be to invest a % of your savings or portfolio in cryptocurrency.

Ensure to do your own research on the cryptocurrency which interest you the most and take the leap.

Risk is everywhere around us.

Keeping money in your bank account or money invested in any asset class involves a level of risk.

The risk appetite for each individual is different and how you split your money between different asset classes will only be up to you.

All investments are interlinked to what central banks or governments decide.

Yes all of them- Apart from cryptocurrency.

Cryptocurrency is the only asset you can hold which is independent and not impacted by central banks.

Investing in Bitcoin and Cryptocurrency is not about speculating on it's price only. It is a way to secure your future and your family's future by hedging against inflation and the short term fixes implemented by governments.

Make sure that you keep your wealth safe and sound independent from other people's stupid decisions!

I hope this makes it a little clearer why you should consider investing in cryptocurrency.

Key difference between Fiat and Cryptocurrency 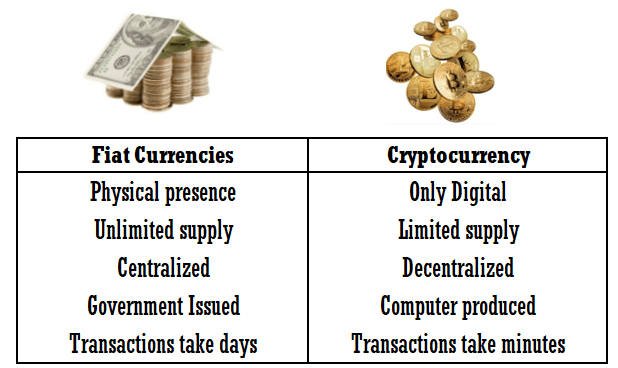